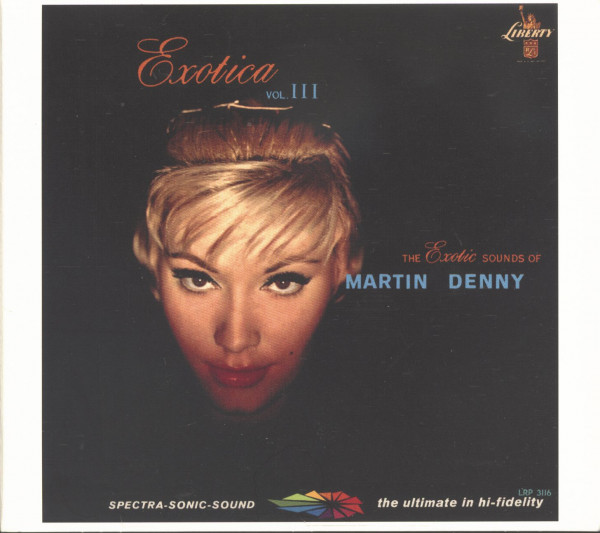 The EXOTIC SOUNDS of MARTIN DENNY

Aloha, hep cats. A question: what do blockbusting novelist James Michener, Fifties America's most influential newspaper columnist Walter Winchell and John Sturges, director of The Magnificent Seven, have in common? Answer: They all wrote sleeve-notes for the albums of 'exotic sounds' released by Hawaiian-based band leader, composer and arranger Martin Denny. 'Martin Denny's music is becoming so famous', wrote Sturges on the cover of the 1958 classic Quiet Village, 'it's a little pointless for me to tell you how wonderful it is. If you've already heard it you know, and if you haven't, stop reading this right now....put on the record and play it' For, in the late 1950s and early 1960s, the 'exotic sounds of Martin Denny' took Cold War America by storm. Denny released 37 albums for Liberty Records, which sold over 4 million copies. In 1957, his first LP, Exotica, hit number one in both the Variety and Billboard charts, and the single taken from it, 'Quiet Village' (which appeared again the following year on the eponymous album), made number two. A rash of releases followed.

There were often three or four LPs in the charts at one time, all with suitably evocative covers and suitably evocative titles: Exoticas 2 and 3, Forbidden Island, Primitiva, Hypnotique, Afro-Desia. Denny and his band toured all over the United States and the Pacific Basin, playing everything from huge concert halls to small college venues. (He even made it to Western Samoa, although never, sadly, to Europe). Then, as middle America's interest in purely 'exotic sounds' began to wane, so Martin Denny made records that reflected broader, more contemporary tastes: Exotic Sounds of the Silver Screen, Exotic Sounds Visit Broadway and finally Exotic Moog (his last LP for Liberty, released in 1969). In 1990,  Denny was tempted back into the recording studio to make an album of old and new tunes for the Japanese market, entitled simply Exotica 90 ; however, he is not in a hurry to repeat the experience. 'When you try to rewrite something, you loose some of the essence,' he admits. 'You can't go home again, you know.' Now aged 84 and living in semi-retirement in Honolulu, Denny still occasionally plays live locally, but that's it. 'The Exotic Sounds of Martin Denny' is therefore, a compilation of tracks taken from Martin Denny's early days in the land of the hula. Brimful of fresh ideas, Hawaiian balm and Oriental promise, this album shows how and ihy Martin Denny justly became the uncrowned King of Exotica.

Born in New York on 10 April 1911, Martin Denny was brought up in Los Angeles, California. A child prodigy, e studied classical piano from the age of ten. Then, whilst studying at the Jniversity of Southern California, he and five friends formed a jazz band called the )on Dean Orchestra, which toured around South America for four and a half ears from 1931. Come the Second World War, Denny served in the US Air orce and, after demob, enrolled at the Los Angeles Conservatory of Music to tudy classical piano and composition. )enny arrived in Hawaii in 1954, initially to play solo piano at Don the Beachcomber's bar on the beach at Waikiki. A six-month assignment turned into a lifelong love affair. He formed a jazz trio which later became a quartet: Denny himself on piano and celeste, Augie Colon on percussion, Arthur Lyman on vibes (replaced by Julius Wechter after the first album) and John Kramer on string bass (soon to be replaced, by Harvey Ragsdale). Modestly, Denny says, had some very talented people. I just directed their abilities in the framework that I wanted. They could express themselves as they wished, which they did.' It was while the quartet was playing the open-air Shell Bar of millionaire Henry J. Kaiser's Hawaiian Village nightclub that Denny formulated his unique sound: Martin Denny became the first person to incorporate animal sounds and exotic instruments in popular music. 'There was a park right near our stage,' he recalls, 'in which there were these bullfrogs.

One night, we were playing there and I noticed this croaking all through the performance. Some of the boys in the band got carried away and started doing bird calls. The following day, somebody walked up to me and said, 'Martin Denny, that song you did with the birds and the frogs? Can you do that again?' I thought, 'What are you talking about?', but I suddenly realised he had a point. From then on, obliging band members (Augie Colon in particular) performed extraordinary animal sounds to order. A contemporary film shows the enormous amounts of energy and spontaneity they put into the performance. Next came the exotic instruments. With an unapologetic catholicisism that is characteristic of his work, Denny asked friends to bring back whatever they could find from their travels: a ukelele from Portugal, a 200-pound talking drum from New Guinea, gongs from Burma. 'I utilised these things,' he says, 'how ever I could. For instance, for 'Hello, Young Lovers', instead of using a regular base I would build it around the sound of these big gongs I had. So when you watched us on stage, there was a pure visual entertainment as well as the music. People were elated by that' The musical style has developed mixes Hawaiian Sounds with Latin rhythms, Oriental nuances with good ol'American apple pie, all overlaid with strange and wonderful noises. It proved an unusual but powerful mix. 'When my music first emerged,' admits Denny, 'some people thought it bizarre. If you have ever tried half a papaya and put a scoop of passion fruit in it, it's a marvellous taste. It's different but it's pleasurable. My music is like that, an exotic fruit salad.'

Many theories have been postulated as to the undoubted commercial success of the Martin Denny sound. Its release on vinyl coincided with the introduction of stereo systems - bird calls make such a refreshing change from trains screaming through tunnels. At the time, America was also going through a craze for Tiki culture and all things 'primitive' - a little bit of Paradise in its own backyard. Some have even suggested that, with its hints of weird goings-on among the 'natives', 'Quiet Village' in particular provided excellent music to make out to. None of these reasons, however, explains the way Martin Denny's music has endured into the 1990s, while many of his imitators sound merely kitsch and MOR. The answer is simple: Martin Denny's Music is both highly sophisticated (that classical training was not wasted) and totally original. It can be appreciated on many different levels by many different people.

Said John Sturges back in [958 : 'I've given up trying to figure out how Martin thinks up this fabulous music, and I'm not sure he knows himself. It sounds and feels the same every time, yet it is always bran( new...fresh and exciting as if you've never heard it before.' The same is true today. Don't analyse; just listen and enjoy.
Sally Holloway, May 1995 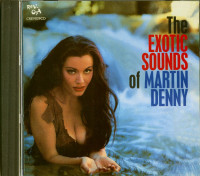 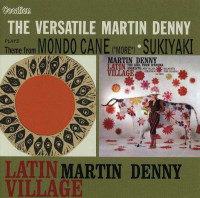 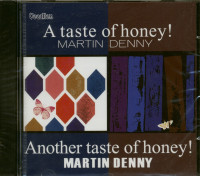 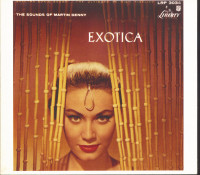