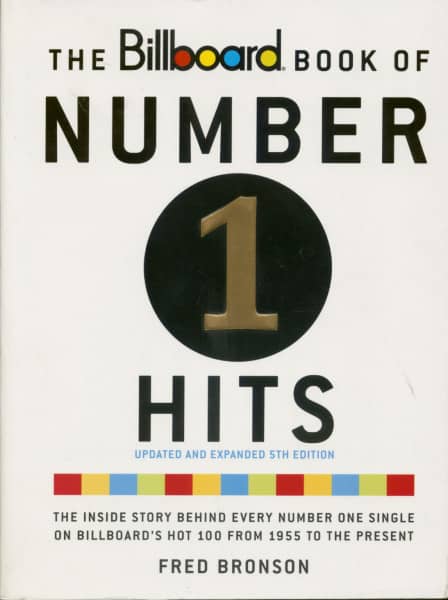 THE Billboard BOOK OF NUMBER 0NE HITS
UPDATED AND EXPANDED 5TH EDITION THE ULTIMATE MUSIC SOURCE FOR EVERY ROCK FAN JUST GOT BETTER!

Anyone who loves rock and roll and pop music should own Fred Bronson's latest edition of The Billboard Book of Number One Hits. Every song has a story, and Fred knows the story to every song. Even if you know the story, Fred's incredible enthusiasm and his profound knowledge of the subject make it even better. In my book, Fred Bronson is #1. LESLEY GORE

I have studied Billboard magazine to learn who wrote what song since I was 14 years old and my Dad got me my first subscription. This book has all of that information and also describes the rich history of the top songs in pop music. I never dreamed I would be one of these number one pop hit writers. I am honored to be a part of this book. I love it. Good job, Fred! DIANE WARREN

Fred Bronson's books have proven to be an invaluable resource over the years. His latest edition of The Billboard Book of Number One Hits is no exception. The attention to detail Fred gives in chronicling each and every song to reach No 1 is quite astounding! "MIKE CURB

Fred Bronson is the music industry's foremost authority on popular music. His knowledge of singers, songwriters, and their songs is unmatched. His book on Billboard #1's is the #1 reference of its kind. CLAY AIKEN

This book is such an extraordinary and fun piece of music history. I would read it even if I weren't in it myself. PEGGY MARCH Fred Bronson's The Billboard Book of Number One Hits is the quintessential music industry manual that everybody in the business and every music lover must have! The facts are accurate, the stories are amusing, and I had a ball reading it! LAMONT DOZIER

Fred Bronson is the author of Billboard's Hottest Hot 100 Hits and co-author of Number One Rhythm & Blues Hits and Dick Clark's American Bandstand. He writes the popular "Chart Beat" column in Billboard magazine. as well as his own chart-oriented section of Billboard.com and the weekly series, The Billboard Radio Countdown, heard at www.billboardradio.com. Bronson's television writing credits include the annual TV special "The American Music Awards." as well as the ABC specials "America Picks the Number One Songs" and "The Disco Ball."