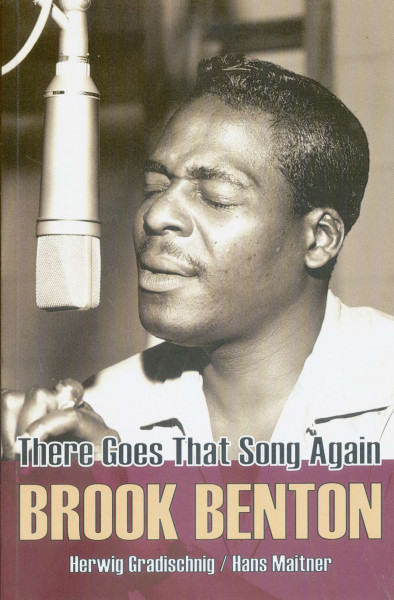 Brook Benton
The biography by Herwig Gradischnig is based on an album of newspaper cuttings personally compiled by Brook Benton. These contain the singer's views on a wide variety of topics, as well as reviews of his work. Personal interviews conducted in the USA with members of Brook's family have also been included. A significant portion of the text is dedicated to detailed discussion of Benton's recordings and analysis of his distinctive vocal style.

The exhaustive discography compiled by Hans Maitner identifies over 660 known recordings by Brook Benton. In this, it far surpasses all others published to date, which generally account for only around 300. The book also contains many rare photographs made available to the authors by the late singer's family. The entire work was authorised by Brook's widow, Mary, and daughter Vanessa, both of whom were keen to see it published.


ABOUT THE AUTHORS
HERWIG GRADISCHNIG was born in 1944 and lives in Oberaich, Austria. He studied German language and literature, history, philosophy and the history of art, and his dissertation on the writer Robert Musil was published in Musil-Studien. He also contributes to textbooks (his speciality is lyrics) and publishes academic papers. His main interest has always been music in all its forms and styles, with a particular focus on vocal technique. His reviews and critiques of popular and jazz recordings have appeared in various Internet forums.

HANS MAITNER was born in 1942. He is a retired banker and lives in Vienna. A music enthusiast since his childhood, he worked as a deejay in various clubs during the rock'n'roll era. In the early '60s, he turned his attention to blues, which became his area of expertise, and soon began promoting young home-grown blues performers. From 1970 to 1980, he presented the Living Blues show on Austrian radio station 03, and in 1976 produced the first record for EMI Austria, Boogie Woogie Session '76. He went on to supervise further sessions with Axel Zwingenberger, Big Joe Turner (in Los Angeles), the Mojo Blues Band, Joachim Palden and others. Between 1976 and 1988, he also acted as artistic director for the Stars of Boogie Woogie concert series.

It's Just A Matter Of Time